The History of the Granary!

A GRANARY FOR ETERNITY

The hotel SPEICHER AM ZIEGELSEE at the old harbour - today a four-star hotel with accolade - was in use as a granary until the early nineties of the last century. It was built for eternity in 1939 as a so called "Reichstypensilo" by a salesmen company. During the terror regime of the Third Reich the jewish partners of the company, the Loewenthal family, were expropriated. After the lost Second World War, the German Democratic Pepublic was founded and the granary became popular property. After the fall of the Berlin Wall, Germany was reunited and the heirs of the former owners regained possession of the granary. In 1995, it was sold to a group of Hamburg based architects and was to be converted into a hotel and boarding house within 12 months.

The existing granary building with a capacity of 6000 tons is a massive steel-and-concrete construction surrounded by a brick-made casing.

Early on during the planning phase focus was put on the conservation of the original character of the listed granary. Two thirds of the building consisted of steel-and-concrete silo cubicles extending from the basement to the 7th floor. The comb-shaped and interconnected silo cubicles immensely challenged planers and construction executors. They calculated 12 weeks of comprehensive deconstruction works.

The deconstruction of the silo cubicles which filled the entire southern part of the building was literally a "tough piece of work" given the existence of concrete walls more than 1m thick. The planers underestimated the way of building during the Third Reich as much as the quality of the concrete and the amount of steel used for construction. As a matter of fact, it took 14 months to bring the silo cubicles down. At the same time, it was important to install a steel structure in the interior of the bulding in order to avert the collapse of the building's casing

Steel builders and deconstructors had to work simultaneously and hand-in-hand. A house-in-house principle was created in the southern part which, in 1996, was awarded a price for innovative steel construction.

The granary is listed as an industrial monument. This fact influenced the construction in terms of material selection and the choice of colours for the exterior casing.
Taking into account the hight of the lake's water level it becomes clear that the granary stands in water. A casemate surrounds the basement like a water-resisting tub. In the course of time, the tub was damaged by massive settings and weight changes. Thus, invading waters complicated building measures in the basement. Parts of the basement are not restored until today.

After the end of the deconstruction works and the installation of the steel structure the building was completed within 12 months. The conceptual plannings for interior works foresaw that the individuality and uniqueness of the building was mirrored in the hotel rooms and public spaces. Thus, in rooms in the northern part of the building old mushroom-shaped steel-and-concrete columns are visible as supporting architectural details. The rigid division of windows and the supporting columns predetermined the lay-out of guestrooms. Thus, different floorplans originated where, at times, a wall had to give way to a window opening.

The use of as many natural materials as possible was important, too. 95% of the furnishings, like lamps, tables and beds were designed and produced according to the unostentatious style distinct to the house.

The old wooden windows were carefully restored and hand formed bricks which broke off, were reused for lintels and the bar.

The use of brown steel in many details reminds us of the the industrial monument's history..


THE GRANARY AND ITS SURROUNDINGS

The first impression is wrong. While approaching a guest might feel an imposition. When arriving the same person immediately gets a sense of the unique tranquillity right at the lake. Sleep as long as you wish with an open window. Who else in Schwerin can offer you this?

It is the intention of the city to develop the former industrial zone "Old Harbour" into a new residential area. Since 1997 the administrative procedures are pending in terms of reshaping the alignment of lots and plots.

The hotel was opened in August 1998. At that time, Speicherstrasse was still a gravel road and the hotel was surrounded by old factory buildings. In October 1999, an old window plant was torn down and the second connecting road to Guestrower Strasse was finished still the same year. However, the final upgrading of Speicherstrasse with a link to Guestrower Strasse was not completed until 2004. Until then, the entire supply and disposal of the hotel had to be secured through private initiative by the owners. Still today, a provisional district heating container is installed on the hotel's ground. Our old guest will be able to tell you about the industrial wasteland that, once, surrounded the hotel.

For the prosperity of the hotel we would wish that the city realises the the waterfront project around the inner Ziegelsee - planned years ago and, actually, desired by so many - in order to relink the old harbour to the heart of the city. But dilapidated warehouses of a former brewery are still standing in the way. 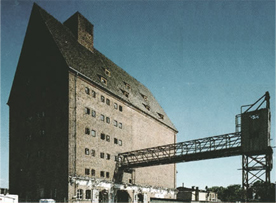 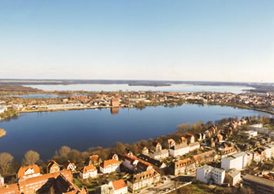 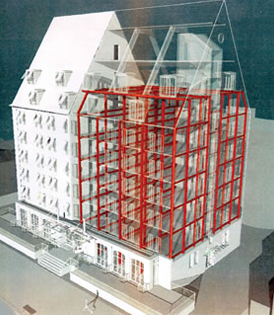 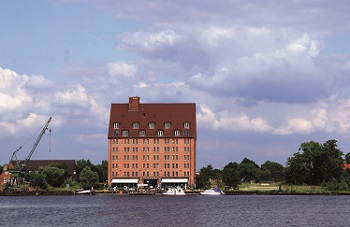 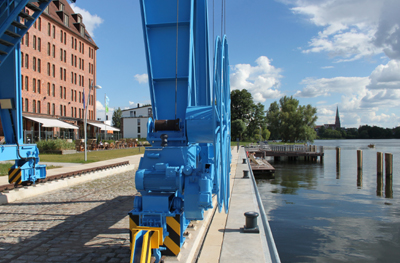